Today, human space flight has become almost routine. The International Space Station (ISS) is manned continuously with astronauts and cosmonauts traveling to and from in both Soyuz and SpaceX Dragon spacecraft. Elon Musk, Jeff Bezos and Richard Branson ha 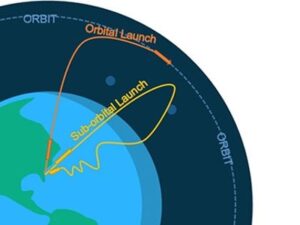 ve launched a kind of space tourism in which a mere $450,000 will get you a suborbital journey above the Earth. There is even a recently announced citizen astronaut program currently accepting applications.

It wasn’t always like this though. On April 12, 1961, Yuri Gagarin, a Russian cosmonaut, became the first man in space, followed by Alan Shepard three weeks later on May 5 with a short, sub-orbital flight that lasted 15 minutes but would not count as actually putting a man in space. It would be two more years before the United States would achieve its first orbital flight.

What’s the difference between a suborbital and an orbital flight? Suborbital flights are much slower and do not reach the speeds required to achieve escape velocity. It wasn’t until February 20, 1962, that John H. Glenn, Jr. became the first American to orbit the Earth in a Mercury spacecraft that was launched into Earth orbit and enabled Glenn to circle Earth three times.

This achievement did not come without its problems and delays, however. The Mercury program was plagued with one delay after another. When Glenn’s Friendship 7 finally rocketed into space, the mission went smoothly until flight controllers noticed a light indicating the capsule’s heat shield might be loose. Without it, Glenn and his spacecraft would burn up in the atmosphere while re-entering. After some discussion, it was decided to keep the spacecraft’s retropack attached, hoping it would hold the heat shield in place during re-entry. Glenn recalled seeing chunks of the retropack fly by his window as it burned up.

Three more project Mercury flights followed. Then NASA moved on to the Gemini program, and then, finally, Project Apollo and the first astronaut landing on the moon in July 1969.

Glenn and Friendship 7 made it safely back to Earth, and Glenn became a national hero. Glenn was a US Senator from Ohio for 25 years and passed away at the age of 95 on December 8, 2016.

If you would like to learn more about this historic mission, explore the links below:

For more information about space, visit the Kaleideum North planetarium for daily shows.