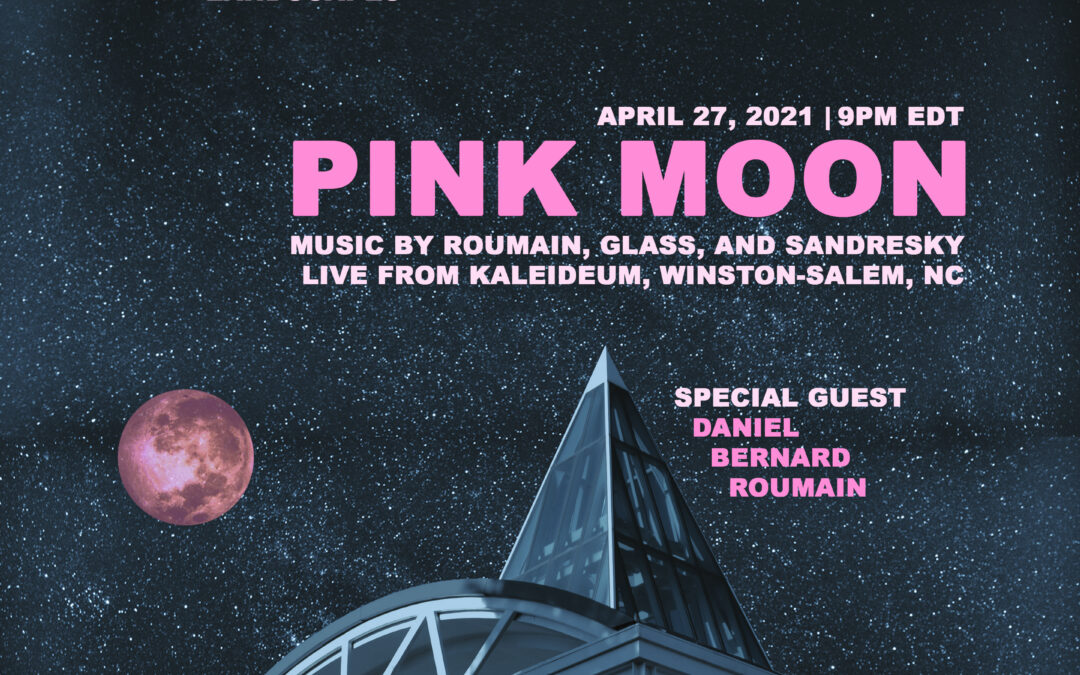 The livestream concert will feature violinist and composer Daniel Bernard Roumain, with additional music by Philip Glass and Sandresky

Composer and pianist Eleonor Sandresky’s new music series Lunar Landscapes comes to the Kaleideum on April 27, 2021, at 9 pm EDT. This special episode “Pink Moon” will be the first of the series to be livestreamed from a planetarium and celebrates the full moon with special guest composer and violinist Daniel Bernard Roumain, as well as music by Philip Glass and Eleonor Sandresky.

The featured cocktail/mocktail is a Pink Martini. You will receive the recipe and snack recommendations when you purchase your ticket, along with a unique link to the event.

Tickets are free to members of Kaleideum, and ticketholders will have special access to educational programming and events related to the cycles of the moon.

Eleonor remarked: “Now that things are beginning to open up, it is a very special pleasure, and most fitting to come back to Winston-Salem, the city of my birth, to begin this new venture — live-streaming from planetariums! In partnership with Kaleideum, I look forward to bringing a little more science to the series, which has, so far, really been music and personality driven.”

“I’ve been interested in space and moon cycles as long as I can remember. My family watched the first lunar landing back in the 1960s, and I’ll never forget that day. I’ve created pieces about space — including A Space Odyssey in 2016 — as well. Recently, being plunged into isolation, my sense of linear time measured by clocks began to erode. The moon and sun cycles became more obvious as I watched the days turn into nights. As a direct result of the pandemic, I launched the Lunar Landscapes online music series as a way to create an opportunity not just for myself but for my colleagues and the music community at large. We stay connected to each other and also to our growing audience of Skywatchers.”

Lunar Landscapes is a new music series curated by Eleonor Sandresky that brings together composers and curious music-lovers under one of nature’s most wondrous occurrences: the full moon. On the night of each Full Moon at 9 pm ET, Eleonor presents a virtual concert and dialogue with a special guest, paired with a themed cocktail/mocktail and snack.

Eleonor combines music, technology in its broadest sense, and a spirit of celebration in the regularity and predictability of the movement of celestial bodies throughout the sky. Each moon has a name and persona, just as each composer has a distinctly unique voice. In its first year, the series features stellar composers Gilda Lyons, Fahad Siadat, Pamela Madsen, Matthew Shipp, Carlos Carrillo, Jobina Tinnemans, Jack van Zandt, Eve Beglarian, Leonardo Heiblum, and Daniel Bernard Romain, as well as filmmaker, Erika Suderburg.

Dubbed a “piano goddess”, North Carolina-native Eleonor Sandresky is a composer, inventor of the Wonder Suit, producer of film with live orchestra concerts, co-founder of the MATA Festival, and performing member of the Philip Glass Ensemble family since 1991.

Dubbed a piano goddess, Eleonor Sandresky’s music is heard around the world, including Cannes Film Festival and the Venice Biennale. She has received grants and commissions from Sequitur, Lara Downes, Rite of Summer, NYS Council on the Arts, Jerome Foundation, ASCAP, New Music USA, and Meet the Composer. among others Eleonor has been a composer-in-residence at Yaddo, STEIM (Studio for Electronic Instrumental Music), and MacDowell. Recent works include Strange Energies, a set of etudes for solo piano (2019); Wunderkammern Live! for ensemble and film, (2017) premiered on Tribeca New Music, Donne Songs Without Words, for choreographed viols and baroque harp, commissioned by Parthenia (2015), and Opening for guitar ensemble, commissioned by The NY Classical Guitar Society (2016). Since 2012 she has been composing etudes for solo piano, Strange Energies, that ask the audience to listen in certain ways, engaging with the music directly and with purpose, available now on Orange Mountain Music.

Working at the forefront of avant-garde concert-as-theater, Eleonor reinvented herself as the Choreographic Pianist with her groundbreaking composition, A Sleeper’s Notebook (1999-2003). In these works, she explores her deep interest in how motion translates to emotion through sound. She is also the inventor of The Wonder Suit, a remote set of wireless sensors worn and used to trigger sonic events during live performance.  She has created large-scale works for the Suit, most recently, A Space Odyssey (2016), which incorporates found sounds from NASA as a basis for the composition. Eleonor continues to don The Wonder Suit in improvised, live performance. In the last few years she has also been a featured composer/performer at London’s Cafe Oto, Morelia Center for Electronic Music in Mexico, San Francisco Center for New Music, USC Fullerton New Music Festival and Gallery MC in Manhattan. Deeply involved in the genre of live music and film, Eleonor composes, conducts and produces concerts of her own scores, as well as those of Leonard Bernstein and Philip Glass. Her music is available on Sony Classics, Koch International, Orange Mountain Music, ERM Media, One Soul Records and Albany Records.

Daniel Bernard Roumain’s acclaimed work as a composer, performer, educator, and activist spans more than two decades, and he has been commissioned by venerable artists and institutions worldwide. “About as omnivorous as a contemporary artist gets” (NYT), DBR is perhaps the only composer whose collaborations span Philip Glass, Bill T. Jones, Savion Glover and Lady Gaga.

Known for his signature violin sounds infused with myriad electronic, urban, and African-American music influences, DBR takes his genre-bending music beyond the proscenium. He is a composer of chamber, orchestral, and operatic works; has won an Emmy for Outstanding Musical Composition for his collaborations with ESPN; featured as keynote performer at technology conferences; and created large scale, site-specific musical events for public spaces. DBR earned his doctorate in Music Composition from the University of Michigan and is currently Institute Professor and Professor of Practice at Arizona State University.

An avid arts industry leader, DBR serves on the board of directors of the League of American Orchestras, Association of Performing Arts Presenters and Creative Capital, the advisory committee of the Sphinx Organization, and was co-chair of 2015 and 2016 APAP Conferences.

DBR has most recently created the musical score for The Just and The Blind, a collaboration with spoken word artist and writer Marc Bamuthi Joseph, commissioned by Carnegie Hall; and a new work for Washington State University’s Symphonic Band, Falling Black Into The Sky, based on the work of the artist James Turrell and his “light work” at Roden Crater.