Don’t Be Afraid To Look Up! 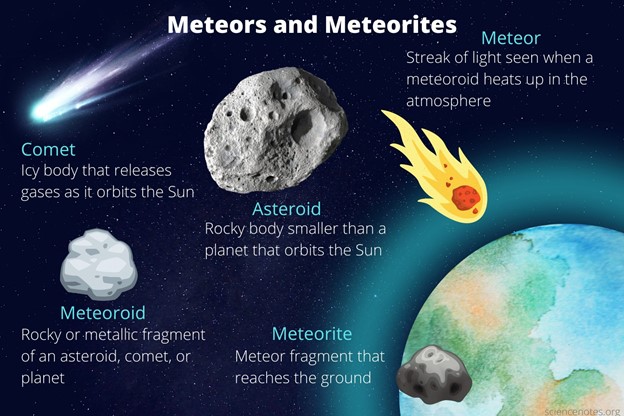 There’s been a lot of press lately about asteroids, comets and meteors potentially hitting Earth. The good news is that NASA knows of zero asteroids large enough to do meaningful damage on Earth that are on a collision course in the near future.

So, what is the difference between an asteroid, meteor and a comet? Basically, it has to do with the location of their orbit as well as the material they are made of. Comets and asteroids are both found in space orbiting the Sun, but a comet is an icy body that releases gases while an asteroid is a rocky body. Meteoroids are smaller than asteroids and change names depending on their proximity to Earth. Meteors are typically our “shooting stars” but can become a meteorite if any fragments reach the ground

When you go out on a clear night and look up you will see stars twinkling throughout the sky. You might also see a few of our solar system’s planets, although they don’t twinkle. But, if you are lucky, you might spot a streak of light flashing across the sky. We often refer to these as “shooting stars.” However, they are not stars at all, but meteors, which are small pieces of dust burning up in the Earth’s atmosphere. 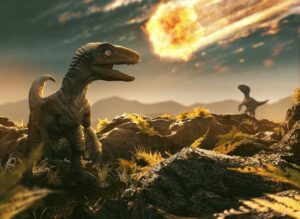 Large meteorites have hit the Earth in the distance past. Two of the more well-known are the ones that created the Chicxulub crater near the Yucatan Peninsula and the Barringer crater in Arizona. The Chicxulub impact event is famously responsible for the extinction event at the end of the Cretaceous period that wiped out the dinosaurs.

The best time to look for meteors is during a meteor shower. Meteor showers occur annually when the Earth passes through the debris field of a comet. The folks at NASA (see below) have some information about the more prominent meteor showers and when they can be seen.  Or you can come by Kaleideum North and see our very own meteor on display!

So go ahead and look up! 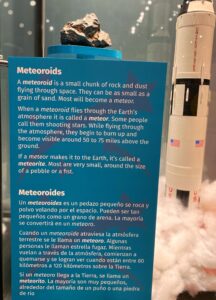 Meteor on display at Kaleideum North in the Sun, Earth, Universe Exhibit