Kaleideum Marks Milestone with a ‘Topping Out’ Ceremony 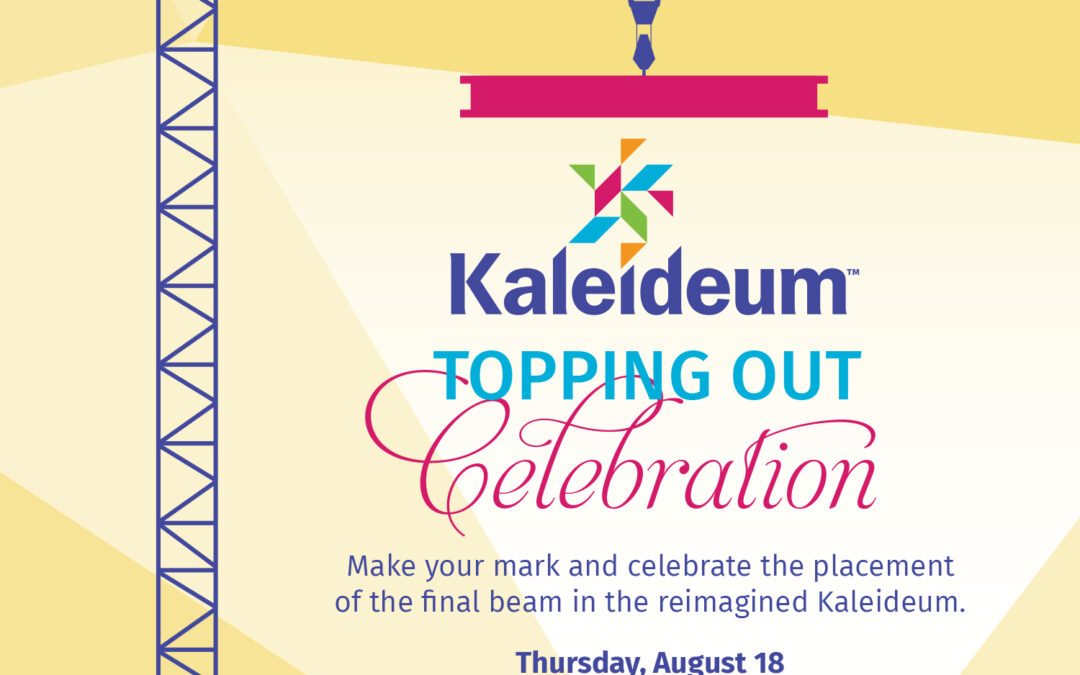 On Thursday, August 18, Kaleideum will mark a major milestone in the construction of its new museum with a “Topping Out” Celebration at 10 am on the construction site at the corner of Third Street and Town Run Lane in downtown Winston-Salem.

“It was almost exactly one year ago that we broke ground for the reimagined Kaleideum,” said Elizabeth Dampier, Kaleideum Executive Director. “We are thrilled that we are at this point already, and we invite everyone to come out and ‘make their mark’ on the new building as we celebrate the placement of the final beams!”

“Topping out” is a tradition in construction and an opportunity for everyone to connect with the building — both literally and symbolically. During the celebration, which is free and open to
the public, individuals will be able to sign their names on the last beams that will
be placed. Frank L. Blum Construction Company is the general contractor for the project; Gensler and Stitch Design Shop are the architects.

“This community is building something special together,” said Mark Dunnagan, Vice President of Frank L. Blum Construction. “The Topping Out Celebration is an opportunity for everyone involved in the building on a daily basis — and the community at large — to come together at this milestone event, celebrate this distinctive cultural resource, and become engaged with Kaleideum as the building comes to life.”

“It’s exhilarating for the design team to see the building take form and to celebrate this milestone with Kaleideum, Forsyth County, Blum, and the Winston-Salem community,” said Brad Burns, Design Director at Gensler. “We look forward to opening day when each person from the community can experience the realized vision co-created by this amazing team.”

The reimagined Kaleideum is scheduled to open in early 2024 and will be located at the 120 West Third Street. The Forsyth County Board of Commissioners is funding $30.5 million of the project, the State of North Carolina provided $3.8 million through a budget appropriation, and Kaleideum has raised approximately $11 million through its “All In” Capital Campaign, which will fund the exciting new exhibits throughout the museum. The City of Winston-Salem provided $2 million for the development of Liberty Plaza, which is adjacent to the museum.

Kaleideum will open with nine exhibitions that allow for multiple types of engagement and appeal to visitors of varying ages and development. These multifaceted, open-ended

experiences will prompt visitors to test theories, seek answers to questions, think critically, shift perspectives, and explore at their own pace.

“In designing the spaces for the reimagined Kaleideum, we have responded to the wants and needs of the community,” Dampier said. “With the new museum, we are moving beyond the concepts of a singular children’s museum or science center to become a learning museum that blends arts and sciences while recognizing the value of both, not as silos, but as integrally connected tools that work together.”

Kaleideum was formed by the merger of The Children’s Museum of Winston-Salem and SciWorks in July 2016. The two museums merged into a single organization with a new mission: “Inspiring wonder, curiosity, and lifelong learning in our children and community through interactive play and discovery.”

Established in 1923, Frank L. Blum Construction Company has been a trusted building partner to owners in North Carolina and Virginia for nearly a century. The firm has a solid reputation for weathering the most challenging economies, partnering with the most exacting owners, and excelling at the most complex projects. Many distinctive and beloved buildings bear the Blum Construction imprint of fine craftsmanship on the original structure or its subsequent renovation or restoration.

Gensler is a global architecture, design, and planning firm with over 50 locations across Asia, Europe, Australia, the Middle East, and the Americas. Founded in 1965, the firm serves more than 3,300 active clients in virtually every industry. Guided by determined optimism, we believe the power of design can spark positive change and create a future that promotes equity, resilience, and well-being for everyone.