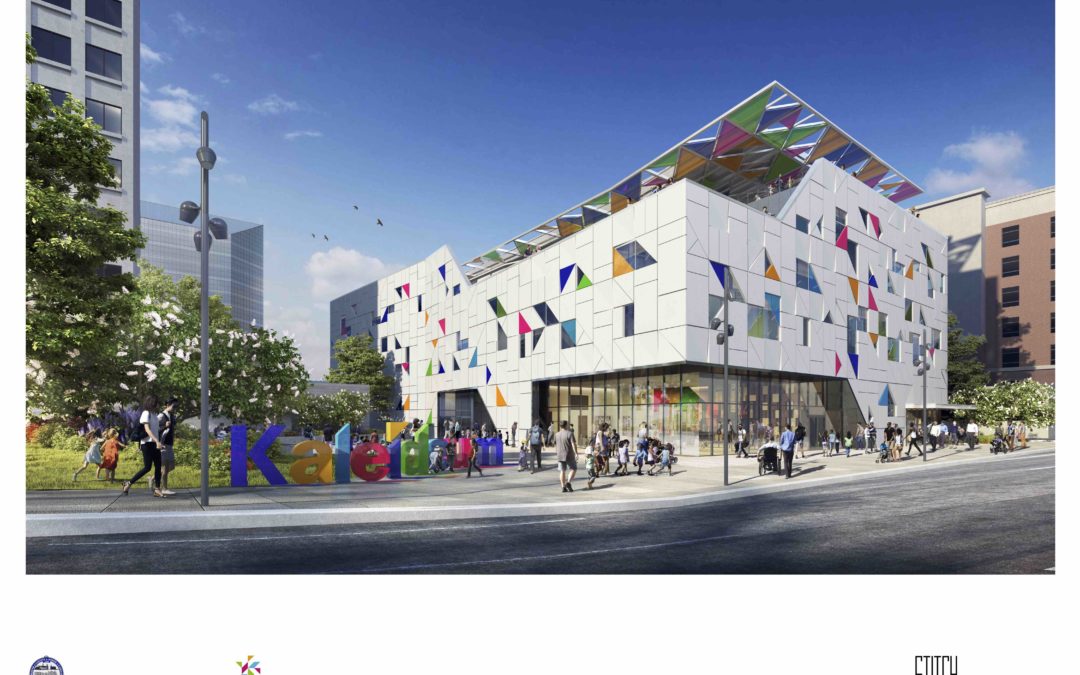 On Thursday, June 25, at 11 am, Kaleideum is pleased to reveal the design for the Museum’s new building in downtown Winston-Salem.

“Museums are catalysts for thriving communities, and as our community is emerging from stay-at-home orders, a contemporary, interactive museum of arts, sciences, and exploration as an accessible destination in the heart of downtown becomes even more important,” says Elizabeth Dampier, Kaleideum Executive Director. “After many years of planning and hard work, we are excited to share the visual manifestation of the values and identity of Kaleideum as a place where individuals of all ages can challenge themselves, push boundaries, ask questions, and engage with their surroundings.”

Gensler, a global architecture, design and planning firm with an office based in Raleigh, and Stitch Design Shop, based in Winston-Salem, are the architects of the project, which is a five-story, approximately 72,000 square foot museum with a 13,000 square foot rooftop playground adventure and event space. “As a Winston-Salem native and a parent of young children, it is both a privilege and a responsibility to live the mission of Kaleideum and create a place within the community that shapes the next generation,” says Chad Parker, Managing Director of Gensler.

The new building is a public/private partnership with Forsyth County, which committed $30.5 million toward the project. The City of Winston-Salem is contributing $2 million for the Liberty Plaza demolition and renovation.

The project site is in a highly accessible location in the heart of downtown Winston-Salem at the corner of 3rd Street and Town Run Lane. It will sit on the site of the former Sheriff’s Building, an office building that is currently being demolished because of limitations that would not allow renovation to maximize the potential museum exhibits. The new family destination will be a link between the arts and cultural district to the north and the more historic and civic district to the south, and it will be flanked by two public spaces, Merschel Park and Liberty Plaza. When completed in 2023, the new museum will anchor the southern end of Merschel Park, a downtown open space to the south of where Trade and Fourth streets intersect.

“The building perimeter engages visitors, providing views into exhibits, access to a new café, and visitor entry access to the museum at 3rd Street and Liberty Plaza,” says Brad Burns Gensler Design Director. “One of the most exciting aspects is the multi-level, elevated rooftop exhibit experience, which provides unique opportunities for learning and play, as well as fantastic views to surrounding areas of downtown and beyond.”

The building concept is grounded in the idea of experiencing spaces and places from diverse perspectives. Two primary materials are used on the exterior: smooth, colorful metal panels and highly textured precast concrete panels. Inspired by geometric forms and the triangulated shapes captured in a kaleidoscope, the instrument of art and science upon which the Museum’s name is based. The folding surfaces of precast concrete provide varying effects of light, shadow and color, based on the time of day and vantage point.

“As a native of this community I can vividly remember visiting the then Nature Science Center in the mid 80s and how it sparked a sense of wonder and an excitement for learning,” says Adam Sebastian with STITCH Design Shop. “Through the innovative use of form, materials, and color to provide compelling visual effects, the new Kaleideum building embodies the spirit of the City of Arts & Innovation while embracing Kaleideum’s mission of inspiring wonder, curiosity and lifelong learning, and providing a safe and welcoming place for our entire community to learn and dream together.”

Kaleideum was formed by the merger of The Children’s Museum of Winston-Salem and SciWorks in July 2016. Kaleideum Downtown (formerly The Children’s Museum) was founded by the Junior League of Winston-Salem and opened its doors in 2004. Kaleideum North (formerly SciWorks), also founded by the Junior League of Winston-Salem, opened its doors as the Nature Science Center in 1964. The two museums merged into a single organization with a new mission — “Inspiring wonder, curiosity, and lifelong learning in our children and community through interactive play and discovery.”