March is Women’s History Month, and this week we’re going to spotlight two prominent women astronomers of the 20th Century. Many important discoveries in science were made by women, but for a variety of reasons they were not allowed to be recognized for their important role in many STEM areas.

Henrietta Leavitt is one of these women. She began working as a “computer” at the Harvard College Observatory in 1893 during a time when women were not allowed to operate the telescope, much less be hired as astronomers. Henrietta was asked to help measure the brightness of variable stars and she noticed that some of these stars in the Magellanic Clouds followed a pattern.

This foundational research helped Edwin Hubble discover that countless galaxies existed beyond our Milky Way. The Hubble telescope was later named in his honor. 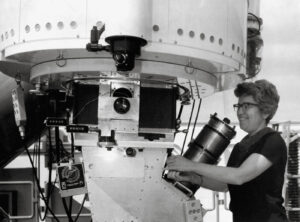 Vera Rubin worked as an astronomer at Georgetown University and the Carnegie Institution of Washington. In the 1970s, Vera studied the way in which galaxies rotate. She expected to find that stars in the outer arms of the galaxy orbited the galactic center slower than those in the inner part of the galaxy — just as planets close to the Sun orbit faster than those far from the Sun. But she was surprised to find that all the stars orbit at the same rate.

This finding led to the conclusion that galaxies contain much more matter than we can see, and that most of the mass in the universe is made up of what is call “dark matter.”

Check out the links below to learn more about these amazing scientists, and be sure to visit Kaleideum North for daily planetarium shows and Laser Specials at 4 pm every day.